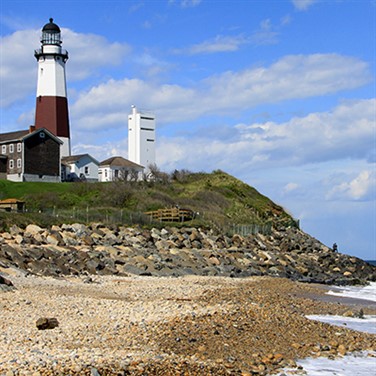 On Route to Sag Harbor, stop at Conscience Point. Take a short walk to the actual landing spot where 20 families from Lynn, Massachusetts landed in June of 1640 to establish the oldest English Settlement in New York State-Southampton. Founded in 1707, Sag  Harbor’s port was the center of foreign and coastal trade and designated by President George Washington in 1789 as an official port of entry into the United States. Sag Harbor's illustrious history will be described as you view its immaculately restored neighborhoods and local treasures. Later, cross the bridge into the Peninsula of North Haven to board ferry to Shelter Island, an 8000-acre enchanted enclave. The Nature Conservancy owns one third of the island maintaining its vast tracts of forests, wetlands, and preserves. Hear about Shelter Island's history as we wind our way through this magical Island nestled between the North and South Forks.

Arrive in Greenport on the North Fork. This was once a bustling whaling port, a center of shipbuilding, and the former heart of Long Island's oyster industry.  It is now a vibrant destination for visitors from all over the world. Travel west to experience the North Folk Wine Trail.  Travel through the many picturesque Villages of North Fork, passing many vineyards that make this area a popular destination throughout the year.

Travel through historic Southampton Village, the oldest English settlement in New York State. The history of Southampton will be described as we travel through former farmlands, now the location of the estates of its celebrated residents. Stop at Cooper's Beach, voted one of America's best beaches.  Taking a stroll on Cooper's Beach is a sublime experience and firsthand look at where Southampton Village residents like to relax and enjoy a swim. The tour takes us down Billionaire's Row, home to some of the wealthiest people in the country living in homes that are among the most expensive in the Hamptons. Stop at Southampton Village's shopping district and see famous landmarks including Hildreth's, America's oldest department store, the charming boutiques of Job's Lane and delightful eateries. Travel to America's most expensive zip codes of Sagaponack, Bridgehampton and East Hampton, traveling past some of the most beautiful homes from Steven Spielberg to Ina Garten. In Montauk, hear the history from its origins as the home of the Montaukett Indians to its development as a fishing village and now the home of beautiful properties, a quaint downtown and magnificent Harbor.

Our tour includes a photo op at the Montauk Point Lighthouse, the oldest lighthouse in New York State.

Enjoy a Mixed Wine Flight Tasting at Raphael Vineyard & Winery. Their mission is to produce ripe, fruit-driven wines that exhibit a marriage of depth, finesse, elegance, and balance – the flavors of the North Fork. Known for its excellent wine, this stop with its elegant tasting room is the ideal location to experience the excellent wines produced on Long Island. Includes a tasting of 4 wines, a snack pack and bottle of water .

The mission of the museum is to preserve, interpret, and promote the culture of Sag Harbor through its collection of historical objects related to the village's whaling history, as well as the presentation of contemporary exhibits and events that reflect the culture of the village today and put Sag Harbor's past and present into context. The Museum is a certified National Treasure and is listed on the National Register of Historic Places.

Enjoy an exclusive private dinner buffet at the Long Island Aquarium! One of its biggest attractions is a 20,000-US-gallon coral reef display tank, which is one of the largest all-living coral displays in the Western Hemisphere. The buffet is set up in the shark tunnel and dining tables are surrounded by large glass tanks of various sea life exhibits.  You are welcome to stroll around the entire indoor space of the Aquarium on your own.  Interact with the Rays in Ray Bay, view the turtle exhibit, stroll over the interior  bridge to view the many large striped bass in the the lagoon, view the 10,000 gallon live reef tank, and most interesting, walk through the shark tunnel where you will see several sharks and other large fish while getting your meal from the buffet!

First Presbyterian Church in Sag Harbor, New York, also known as Old Whaler's Church, is a historic and architecturally notable Presbyterian church built in 1844 in the Egyptian Revival style. The church is Sag Harbor's "most distinguished landmark." The Church was built when Sag  Harbor was at the height of prosperity and 63 whaling ships called Sag Harbor home port.

Eyre has a select quantity of wheelchair accessible motorcoaches available; therefore, we suggest you contact a Travel Advisor to discuss any needs you may have before reserving your trip.

Travel to Riverhead, NY
Lunch on own en route
Check in for (3) overnights at Hyatt Place, Riverhead NY
Dinner included at Jerry & the Mermaid

Located at the gateway of Long Island's famed East End and situated along the picturesque Peconic River, the Hyatt Place Hotel is an ideal East End location in downtown Riverhead.

Hotel features both indoor and outdoor swimming pools, a state of the art fitness center, an intimate coffee and wine cafe and a full-service business center.