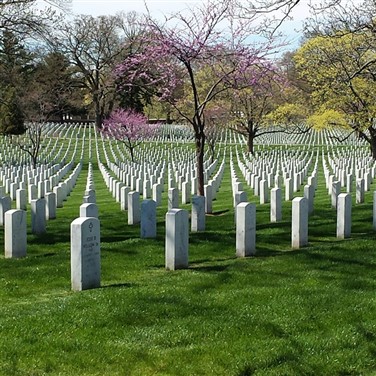 Spend a day in reflection as you visit two memorials and explore the rich history found within Arlington National Cemetery's grounds.

Passengers can hop off & on vehicle at leisure.

The Changing of the Guard ceremony occurs at the Tomb of the Unknowns every 30 minutes, on the hour & the half hour, April through September and every hour on the hour October through March.

The United States Marine Corps War Memorial represents this nation's gratitude to Marines and those who have fought beside them. While the statue depicts one of the most famous incidents of World War II, the memorial is dedicated to all Marines who have given their lives in defense of the United States since 1775.

The United States Air Force Memorial honors the service and sacrifices of the men and women of the United States Air Force and its predecessor organizations, including the Aeronautical Division, U.S. Signal Corps; the Aviation Section, U.S. Signal Corps; the Division of Military Aeronautics, Secretary of War; the Army Air Service; the U.S. Army Air Corps; and the U.S. Army Air Forces. More than 54,000 airmen have died in combat while serving in the Air Force and these historical service arms of the military, the second highest of any of America's four armed services.

Fashion Centre at Pentagon City, located just moments from the nation's capital, and on the Washington DC Metro system, offers a world-class shopping experience where avenues of fashion and boulevards of style await. A scenic glass elevator ride to the third level reveals more than 170 fascinating stores and restaurants including Macy's, Nordstrom, The Ritz-Carlton, Apple, Coach, Michael Kors, and Tourneau. The skylit food court features international specialties from the familiar to the exotic.